Voteview includes the pseudo rollcall voting records for presidents. Those votes were determined as described by Poole on the legacy voteview.com site:

Please note that the House files now contain scores for most Presidents. For Presidents prior to Eisenhower these are based on roll calls corresponding to Presidential requests. These roll calls were compiled by an NSF project headed by Elaine Swift (Study No. 3371, Database of Congressional Historical Statistics, 1789-1989). Many of these scores are based upon a small number of roll calls so use them with caution!

How exactly to infer the positions taken by the president on particular votes may vary from source to source as will the calculation of the rate of support, so you should expect that there will be some differences between the scores that are calculated here and than those calculated by, for example, CQ.

Given these roll call "voting" records for the President in each year, we calculate member-level and chamber-level measures of presidential support for every year following the procedure described in George C. Edwards III "Measuring Presidential Success in Congress: Alternative Approaches." Journal of Politics (1985, 47(2):667-685).

If you continue scrolling through this page, you will find a plot comparing our support scores to the "overall" scores presented by Edwards for the House. The scores are within a point or two at the aggregate level in 28 of 31 years for which Edwards reports aggregate presidential support in the House of Representatives. You will also find summary plots of all of the scores across time for both the House and the Senate.

The following csv files are available:

How we do it

Here we walk through the code that we use to create the scores. If you want to alter the code to produce scores using a different formula, you can download the code along will the source for this file [here]{support_scores.Rmd}.

We begin with a function that calculates the score for a particular chamber and congress number:

We then calculate the scores across all Congresses and chambers, starting with the the House:

and then the Senate:

Here we calculate the summary for the Senate:

Comparing Voteview-based scores to those presented in Edwards (1985)

We begin by loading data from Edwards (1985), Table 2 as well as the aggregate scores that we just created and merging those two datasets.

We can then plot our chamber-level scores against those reported by Edwards: 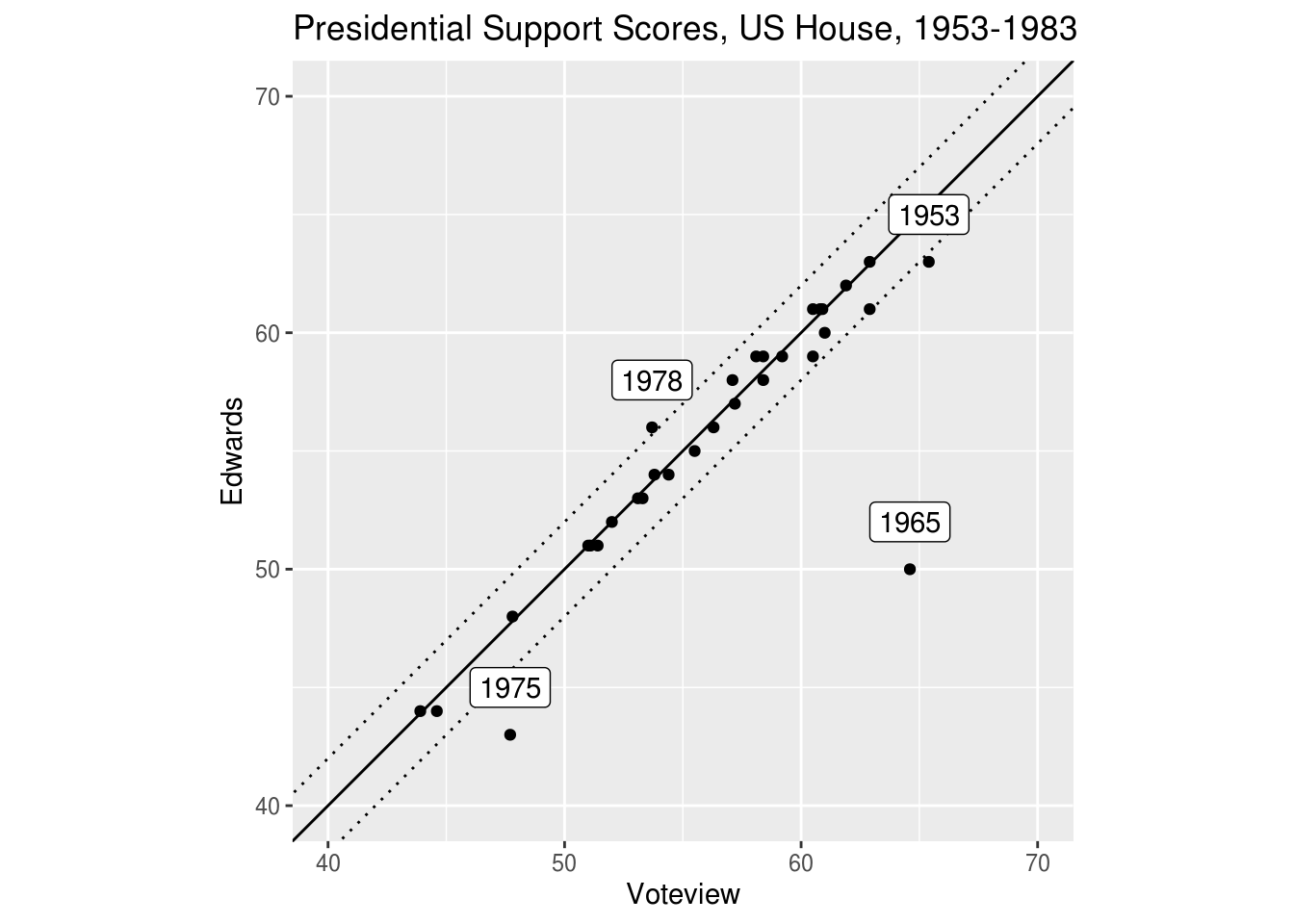 Across the 31 years for which Edwards reports scores, there are only three years in which the difference between what Edwards reports and what we compute based on the Voteview data is greater than 2 percentage points. Those years are 1953, 1965, 1975, and 1978. We have not uncovered the source of these larger discrepancies.

The line plot below show the average level of presidential support in the House over the entire history of the chamber. Edwards' scores are overlayed in red for comparison in the period for which he reports them. As seen in the previous plot, the only major discrepancy between the two series occurs in 1965. 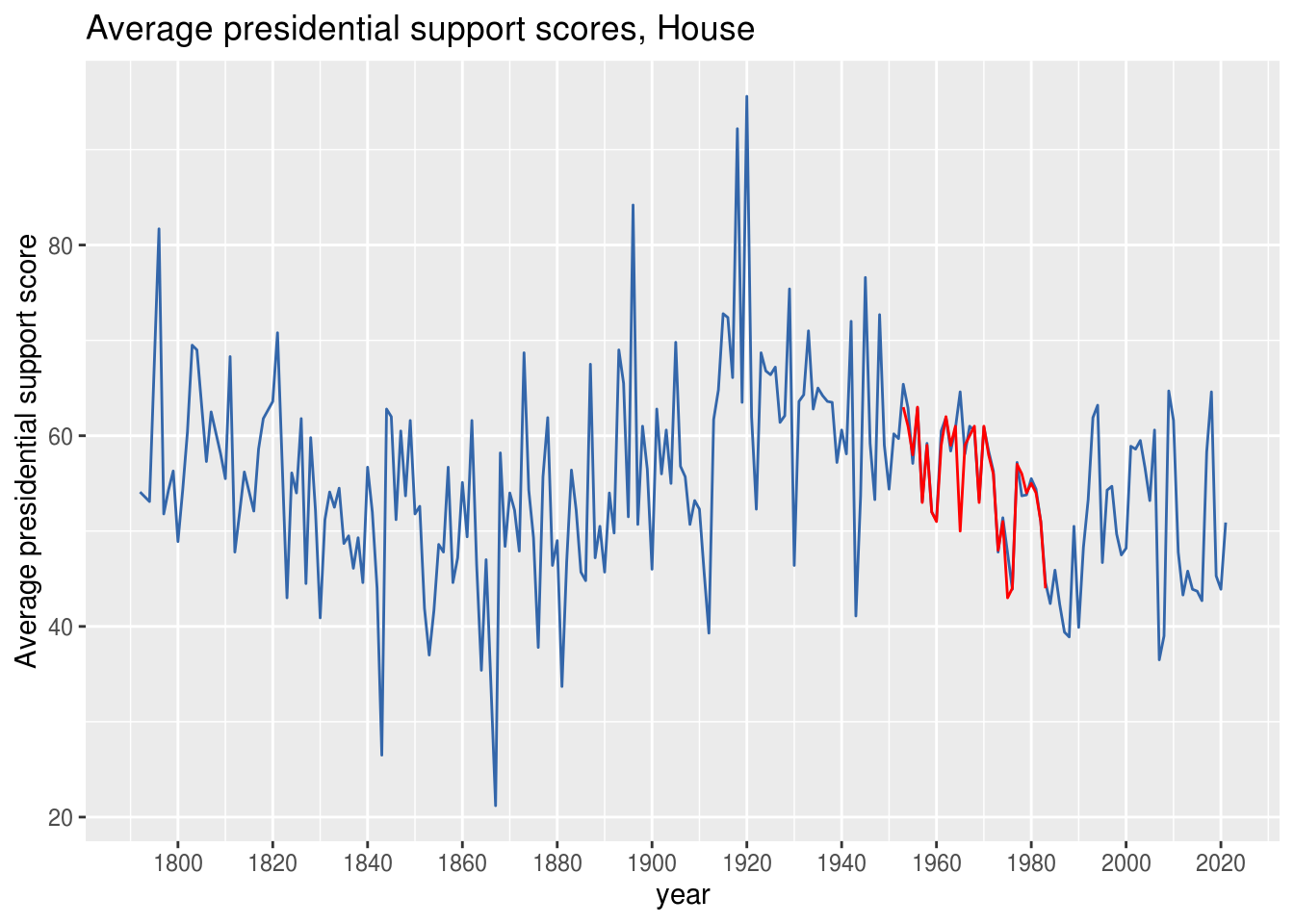 Finally, we plot the presidential support scores for all House members and all Senate members across all years. Each point represents a member in a particular year. The points are "jittered" by small random shocks so that clusters of members with the same score in the same year can be distinguished.

Prior to 1950, the number of votes upon which the scores are based are relatively small and the number of distinct scores is small with large numbers of members generally piling up at each possible value. 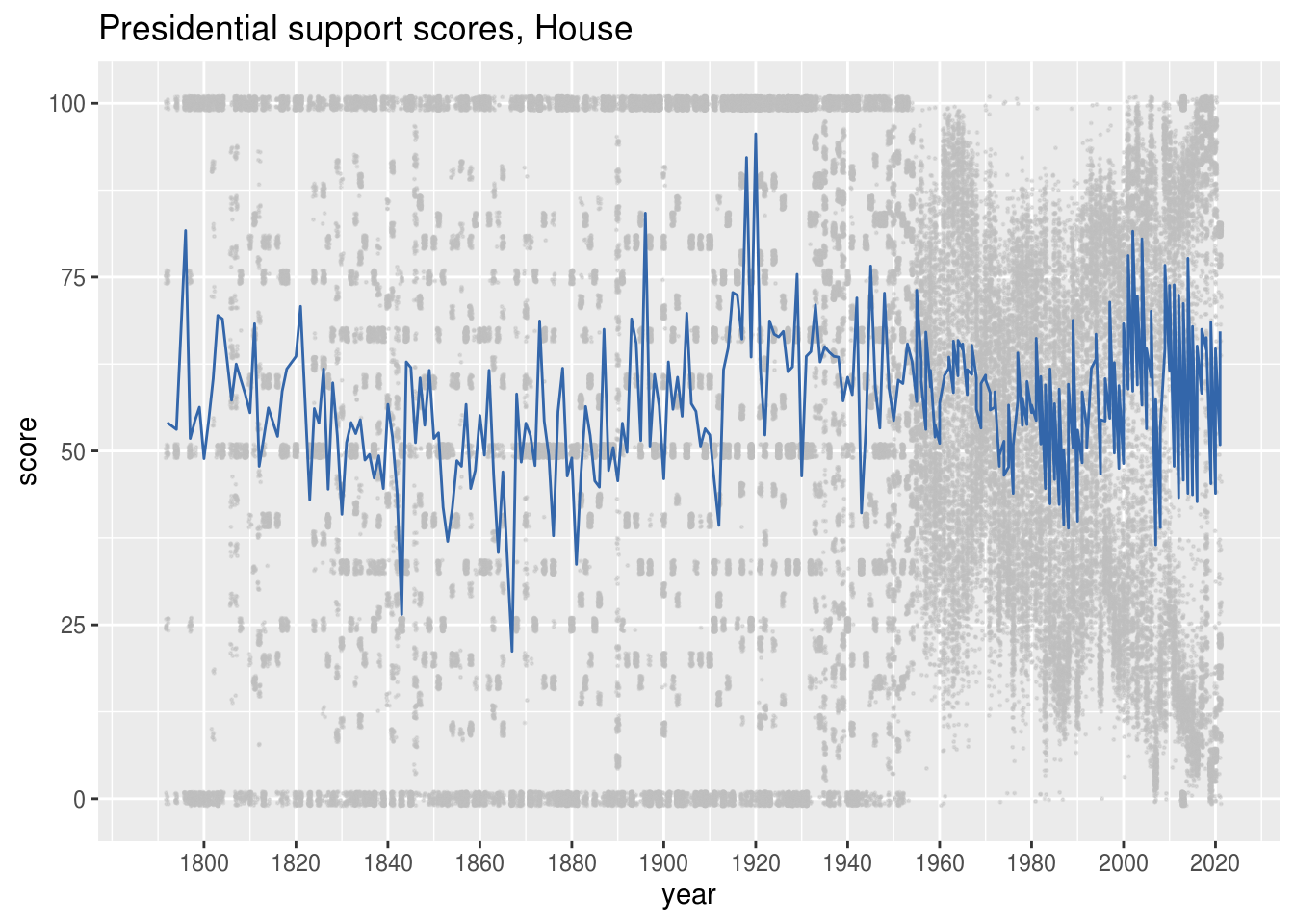 Note that at the moment the database does not include the presidents' positions on roll calls taken in the Senate prior to 1955. 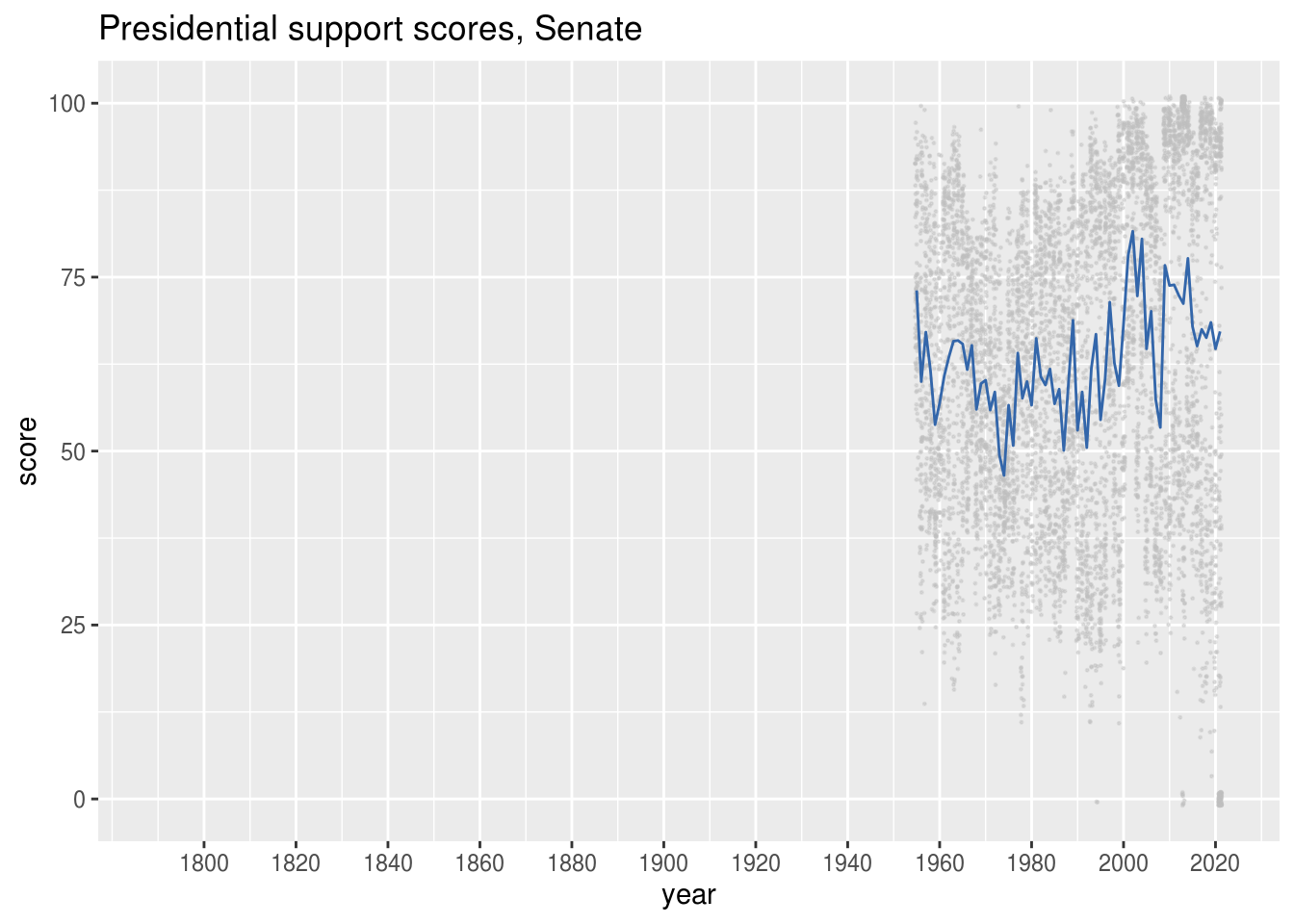