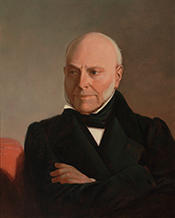 Adamsite, President of the United States

A Senator and Representative from Massachusetts and 6th President of the United States; born in Braintree, Mass., July 11, 1767; acquired his early education in Europe at the University of Leyden; was graduated from Harvard University in 1787; studied law; was admitted to the bar and commenced practice in Boston, Mass.; appointed Minister to Netherlands 1794, Minister to Portugal 1796, Minister to Prussia 1797, and served until 1801; commissioned to make a commercial treaty with Sweden in 1798; elected to the Massachusetts State senate in 1802; unsuccessful candidate for election to the U.S. House of Representatives in 1802; elected as a Federalist to the United States Senate and served from March 4, 1803, until June 8, 1808, when he resigned, a successor having been elected six months early after Adams broke with the Federalist party; Minister to Russia 1809-1814; member of the commission which negotiated the Treaty of Ghent in 1814; Minister to England 1815-1817, assisted in concluding the convention of commerce with Great Britain; Secretary of State in the Cabinet of President James Monroe 1817-1825; decision in the 1824 election of the President of the United States fell, according to the Constitution of the United States, upon the House of Representatives, as none of the candidates had secured a majority of the electors chosen by the states, and Adams, who stood second to Andrew Jackson in the electoral vote, was chosen and served from March 4, 1825, to March 3, 1829; elected as a Republican to the U.S. House of Representatives for the Twenty-second and to the eight succeeding Congresses, becoming a Whig in 1834; served from March 4, 1831, until his death; chairman, Committee on Manufactures (Twenty-second through Twenty-sixth, and Twenty-eighth and Twenty-ninth Congresses), Committee on Indian Affairs (Twenty-seventh Congress), Committee on Foreign Affairs (Twenty-seventh Congress); unsuccessful candidate for Governor of Massachusetts in 1834; died in the U.S. Capitol Building, Washington, D.C., February 23, 1848; interment in the family burial ground at Quincy, Mass.; subsequently reinterred in United First Parish Church.
Courtesy of Biographical Directory of the United States Congress
Next page