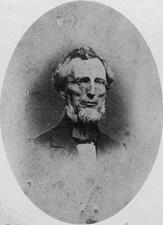 WHITE, Albert Smith, Representative and a Senator from Indiana; born in Orange County, N.Y., October 24, 1803; graduated from Union College, Schenectady, N.Y., in 1822; studied law; admitted to the bar in 1825 and practiced; moved to Lafayette, Ind.; assistant clerk of the State house of representatives 1830-1831, and clerk 1832-1835; unsuccessful candidate for election in 1832 to the Twenty-third Congress; presidential elector on the Whig ticket in 1836; elected as a Whig to the Twenty-fifth Congress (March 4, 1837-March 3, 1839); was not a candidate for renomination in 1838; elected as a Whig to the United States Senate and served from March 4, 1839, to March 3, 1845; declined to be a candidate for reelection; chairman, Committee to Audit and Control the Contingent Expenses (Twenty-seventh Congress), Committee on Indian Affairs (Twenty-seventh and Twenty-eighth Congress); president of several railroads; moved to Stockwell, Ind., and resumed the practice of law; elected as a Republican to the Thirty-seventh Congress (March 4, 1861-March 3, 1863); was not a candidate for renomination in 1862; appointed by President Abraham Lincoln one of three commissioners to adjust the claims of citizens of Minnesota and Dakota against the government for Indian depredations; appointed judge of the United States Court for the District of Indiana in 1864 and served until his death in Stockwell, Ind., September 4, 1864; interment in Greenbush Cemetery, Lafayette, Ind.
Courtesy of Biographical Directory of the United States Congress
Next page