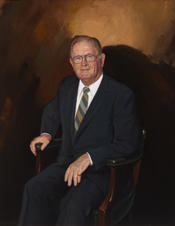 WHITTEN, Jamie Lloyd, Representative from Mississippi; born in Cascilla, Tallahatchie County, Miss., April 18, 1910; attended the public schools and the literary and law departments of the University of Mississippi at Oxford; was admitted to the bar in 1932 and commenced the practice at Charleston, Miss.; principal of the Cowart School in Tallahatchie County, Miss., in 1930 and 1931; member of the State house of representatives in 1931 and 1932; elected district attorney of the seventeenth district of Mississippi, 1933-1941; elected as a Democrat to the Seventy-seventh Congress by special election, November 4, 1941, to fill the vacancy caused by the resignation of Wall Doxey; reelected to the twenty-six succeeding Congresses and served from November 4, 1941, to January 3, 1995; not a candidate for reelection to the One Hundred Fourth Congress; cochairman, Joint Committee on Budget Control (Ninety-second and Ninety-third Congresses); chairman, Committee on Appropriations (Ninety-sixth through One Hundred Second Congresses); died in Oxford, Miss., on September 9, 1995; interment in Charleston Cemetery, Charleston, Miss.
Courtesy of Biographical Directory of the United States Congress
Next page