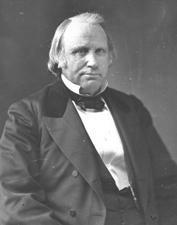 a Senator from Massachusetts and a Vice President of the United States; born Jeremiah Jones Colbath in Farmington, N.H., February 16, 1812; worked on a farm; attended the common schools; had his name legally changed by the legislature to Henry Wilson in 1833; moved to Natick, Mass., in 1833 and learned the shoemaker's trade; attended the Strafford, Wolfsboro, and Concord Academies for short periods; taught school in Natick, Mass., where he later engaged in the manufacture of shoes; member of the State legislature between 1841 and 1852; owner and editor of the Boston Republican 1848-1851; unsuccessful candidate for election in 1852 to the Thirty-third Congress; delegate to the State constitutional convention in 1853; unsuccessful Republican candidate for governor of Massachusetts in 1853; elected on January 31, 1855, to the United States Senate by a coalition of Free Soilers, Americans, Conscience Whigs and Democrats to fill the vacancy caused by the resignation of Edward Everett, and soon after aligned with new Republican party; reelected as a Republican in 1859, 1865, and 1871, and served from January 31, 1855, to March 3, 1873, when he resigned to become Vice President; chairman, Committee on Military Affairs and the Militia (Thirty-seventh through Fortieth Congresses), Committee on Military Affairs (Forty-first and Forty-second Congresses); in 1861 he raised and commanded the Twenty-second Regiment, Massachusetts Volunteer Infantry; elected Vice President of the United States on the Republican ticket with President Ulysses Grant and served from March 4, 1873, until his death in the Capitol Building, Washington, D.C., November 22, 1875; lay in state in the Rotunda of the U.S. Capitol, November 25-26, 1875; interment in Old Dell Park Cemetery, Natick, Mass.
Courtesy of Biographical Directory of the United States Congress
Next page