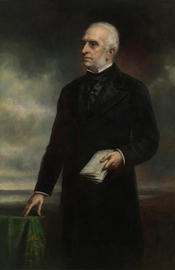 WINTHROP, Robert Charles, Representative and a Senator from Massachusetts; born in Boston, Mass., May 12, 1809; graduated from Harvard University in 1828; studied law with Daniel Webster; admitted to the bar in 1831 and practiced in Boston; member, State house of representatives 1835-1840, and served as speaker 1838-1840; elected as a Whig to the Twenty-sixth Congress to fill the vacancy caused by the resignation of Abbott Lawrence; reelected to the Twenty-seventh Congress and served from November 9, 1840, to May 25, 1842, when he resigned; subsequently elected to the Twenty-seventh Congress to fill the vacancy caused by the resignation of his successor, Nathan Appleton; reelected to the Twenty-eighth and to the three succeeding Congresses and served from November 29, 1842, to July 30, 1850, when he again resigned to become Senator; Speaker of the House of Representatives during the Thirtieth Congress; appointed as a Whig to the United States Senate on July 27, 1850, to fill the vacancy caused by the resignation of Daniel Webster and served from July 30, 1850, to February 1, 1851, when a successor was elected; unsuccessful candidate for election to the vacancy in 1851; was an unsuccessful candidate for governor of Massachusetts the same year; presidential elector on the Whig ticket in 1852; engaged in literary, historical, and philanthropic pursuits; died in Boston, Mass., November 16, 1894; interment in Mount Auburn Cemetery, Cambridge, Middlesex County, Mass.
Courtesy of Biographical Directory of the United States Congress
Notice: By custom, the Speaker of the House rarely votes. Votes for WINTHROP, Robert Charles may appear to be missing as a result.
Next page