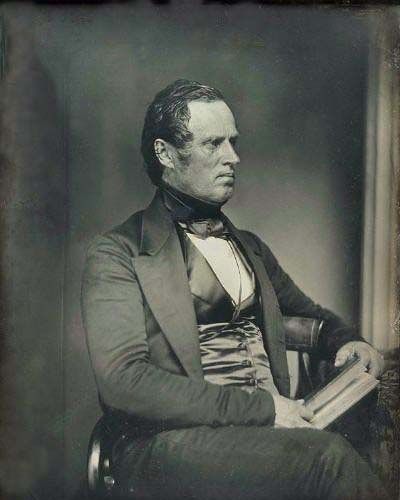 BRIGGS, George Nixon, Representative from Massachusetts; born in Adams, Mass., April 12, 1796; when seven years of age moved with his parents to Manchester, Vt., and, two years later, to White Creek, N.Y.; attended the public schools; moved to Lanesboro, Mass., in 1814; apprenticed to the hatters trade; studied law; was admitted to the bar in 1818 and commenced practice in Lanesboro; register of deeds for Berkshire County 1824-1831; elected town clerk in 1824; appointed chairman of the board of commissioners of highways in 1826; elected as an Anti-Jacksonian to the Twenty-second through the Twenty-fourth Congresses and as a Whig to the Twenty-fifth through Twenty-seventh Congresses (March 4, 1831-March 3, 1843); chairman, Committee on Public Expenditures (Twenty-sixth Congress), Committee on the Post Office and Post Roads (Twenty-seventh Congress); was not a candidate for renomination in 1842; moved to Pittsfield in 1843; Governor of Massachusetts 1844-1851; resumed the practice of law in Pittsfield; member of the State constitutional convention in 1853; judge of the court of common pleas 1853-1858; appointed in 1861 as a member of a commission to adjust differences between the United States and New Granada; accidentally killed in Pittsfield, Berkshire County, Mass., on September 11, 1861; interment in the Pittsfield Cemetery.
Courtesy of Biographical Directory of the United States Congress
Next page