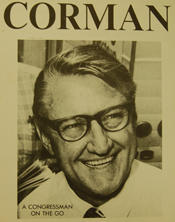 CORMAN, James Charles, Representative from California; born in Galena, Cherokee County, Kans., October 20, 1920; moved with his family to Los Angeles, Calif., in 1933; attended the public schools of Los Angeles and graduated from the University of California at Los Angeles in 1942, and from the University of Southern California Law School in 1948; served as a lieutenant in the United States Marine Corps with the Third Marine Division, 1942-1946, and was in the Bougainville, Guam, and Iwo Jima actions; also served in the United States Marine Corps, 1950-1952; was admitted to the bar in 1949 and engaged in the practice of law in Van Nuys, Calif.; member of Los Angeles city council, 1957-1960; member, Presidents National Advisory Commission on Civil Disorders, 1967-1968; elected as a Democrat to the Eighty-seventh and to the nine succeeding Congresses (January 3, 1961-January 3, 1981); unsuccessful candidate for reelection in 1980 to the Ninety-seventh Congress; died on December 30, 2000 in Arlington, Va.; interment at Arlington National Cemetery.
Courtesy of Biographical Directory of the United States Congress
Next page