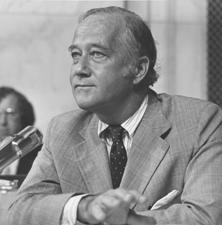 MATHIAS, Charles McCurdy, Jr., Representative and a Senator from Maryland; born in Frederick, Md., July 24, 1922; attended the public schools; graduated from Haverford College (Pa.) in 1944; attended Yale University; received law degree from the University of Maryland in 1949; admitted to the bar and commenced the practice of law in Frederick, Md., in 1949; during the Second World War enlisted in the United States Navy as an apprentice seaman in 1942; commissioned an ensign in 1944 and was on sea duty in the Pacific Ocean area from 1944 until released from active duty in 1946; captain in the Naval Reserve; assistant attorney general of Maryland 1953-1954; city attorney of Frederick, Md., 1954-1959; member of Maryland house of delegates 1959-1960; elected as a Republican to the Eighty-seventh and to the three succeeding Congresses (January 3, 1961-January 3, 1969); was not a candidate for reelection, but was elected to the United States Senate in 1968; reelected in 1974 and 1980 and served from January 3, 1969, until January 3, 1987; was not a candidate for reelection; chairman, Special Committee on Termination of the National Emergency (Ninety-second through Ninety-fourth Congresses), co-chairman, Joint Committee on Printing (Ninety-seventh and Ninety-ninth Congresses), Joint Committee on the Library (Ninety-eighth and Ninety-ninth Congresses), chairman, Committee on Rules and Administration (Ninety-seventh through Ninety-ninth Congresses); practiced law in Washington, D.C.; was a resident of Chevy Chase, Maryland, until his death on January 25, 2010; private burial.
Courtesy of Biographical Directory of the United States Congress
Next page