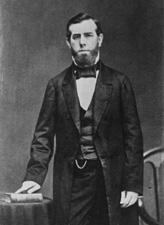 BRODERICK, David Colbreth, (cousin of Andrew Kennedy and Case Broderick), a Senator from California; born in Washington, D.C., February 4, 1820, his father having emigrated from Ireland to work as a stonecutter on the Capitol; moved with his parents to New York City in 1823; attended the common schools; apprenticed to a stonecutter in early youth; unsuccessful candidate for election in 1846 to the Thirtieth Congress; moved to California in 1849 and engaged in smelting and assaying gold; member, State senate 1850-1851, serving as president in 1851; elected as a Democrat to the United States Senate and served from March 4, 1857, until mortally wounded in a duel with the chief justice of the supreme court of California; died near San Francisco, Calif., September 16, 1859; interment under a monument erected by the people of the State in Lone Mountain (later Laurel Hill) Cemetery, San Francisco; reinterred in 1942 in Cypress Lawn Memorial Park, Colma, Calif.
Courtesy of Biographical Directory of the United States Congress
Next page