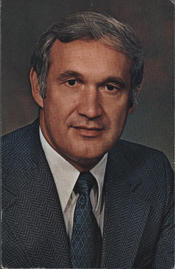 SNYDER, Marion Gene, Representative from Kentucky; born in Louisville, Jefferson County, Ky., January 26, 1928; attended the public schools; graduated from duPont Manual High School; studied at the University of Louisville and graduated from the Jefferson School of Law (now part of the University of Louisville School of Law), LL.B. and J.D., 1950; was admitted to the bar and commenced the practice of law in Louisville, Ky., in 1950; city attorney of Jeffersontown, Ky., 1954-1958; elected magistrate of the first district of Jefferson County for two terms, January 1958 to January 1962; engaged in farming, real estate, insurance, and also in the residential construction business; delegate, Republican National Convention, 1968, 1976, 1980 and 1984; elected as a Republican to the Eighty-eighth Congress (January 3, 1963-January 3, 1965); unsuccessful candidate for reelection in 1964 to the Eighty-ninth Congress; elected in 1966 to the Ninetieth and to the nine succeeding Congresses (January 3, 1967-January 3, 1987); was not a candidate for reelection in 1986; died on February 16, 2007, in Naples, Fla.
Courtesy of Biographical Directory of the United States Congress
Next page