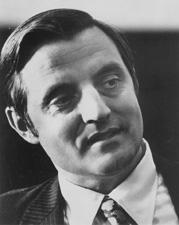 A Senator from Minnesota and Vice President of the United States; born in Ceylon, Martin County, Minn., January 5, 1928; attended the Heron Lake and Elmore, Minn., public schools; attended Macalester College in St. Paul, Minn.; graduated from the University of Minnesota in 1951; served in the United States Army 1951-1953; graduated from the University of Minnesota Law School 1956; admitted to the Minnesota bar in 1956 and commenced practice in Minneapolis; appointed and elected attorney general of Minnesota in 1960 and reelected in 1962; member of the President's Consumer Advisory Council 1960-1964; appointed on December 30, 1964, as a Democrat to the United States Senate to fill the vacancy caused by the resignation of Hubert H. Humphrey for the term ending January 3, 1967; elected in 1966 for the term commencing January 3, 1967; reelected in 1972 and served from December 30, 1964, until his resignation December 30, 1976; chairman, Select Committee on Equal Education Opportunity (Ninety-first and Ninety-second Congresses); elected Vice President of the United States on the Democratic ticket with President Jimmy Carter on November 2, 1976; inaugurated January 20, 1977, and served until January 20, 1981; unsuccessful Democratic candidate for reelection; unsuccessful Democratic nominee for President of the United States in 1984; Ambassador Extraordinary and Plenipotentiary to Japan, 1993-1996; special envoy to Indonesia (1998); unsuccessful Democratic candidate for the U.S. Senate in 2002; was a resident of Minneapolis, Minn., until his death on April 19, 2021.
Courtesy of Biographical Directory of the United States Congress
Next page