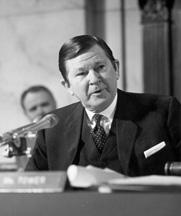 TOWER, John Goodwin, a Senator from Texas; born in Houston, Harris County, Tex., September 29, 1925; educated in the public schools of Houston and Beaumont, Tex.; enlisted in the Navy during the Second World War in 1943, saw action in the Pacific, and was discharged with the rank of seaman first class in 1946; graduated from Southwestern University, Georgetown, Tex., 1948, and with a graduate degree from Southern Methodist University, Dallas, Tex., 1953; attended London School of Economics and Political Science; member of the faculty of Midwestern University, Wichita Falls, Tex., 1951-1960; elected as a Republican to the United States Senate, May 27, 1961, to fill the vacancy caused by the resignation of Lyndon B. Johnson for the term ending January 3, 1967; reelected in 1966, 1972 and 1978 and served from June 15, 1961, to January 3, 1985; did not seek reelection; chairman, Republican Policy Committee (Ninety-third through Ninety-eighth Congresses), Committee on Armed Services (Ninety-seventh and Ninety-eighth Congresses); appointed a member of the United States arms negotiation team in Geneva, Switzerland, by President Ronald Reagan 1985; chairman, Presidents Special Review Board (Tower Commission) 1987; appointed Secretary of Defense in 1989 by President George Bush but not confirmed; chairman, Presidents Foreign Intelligence Advisory Board 1989; was a resident of Dallas, Tex., until his death in a plane crash near Brunswick, Ga., April 5, 1991; interment in Hillcrest Mausoleum, Dallas, Tex.
Courtesy of Biographical Directory of the United States Congress
Next page