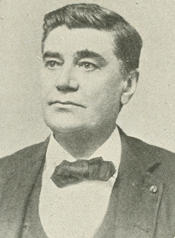 BRUMM, Charles Napoleon, (father of George Franklin Brumm), Representative from Pennsylvania; born in Pottsville, Schuylkill County, Pa., June 9, 1838; attended the common schools and Pennsylvania College, Gettysburg, Pa.; studied law for two years; under the first call of President Lincoln for three-months men enlisted as a private and was elected first lieutenant of Company I, Fifth Regiment, Pennsylvania Volunteer Infantry; reenlisted September 15, 1861, for three years and was elected first lieutenant of Company K, Seventy-sixth Regiment, Pennsylvania Volunteer Infantry, November 18, 1861; detailed on the staff of General Barton as assistant quartermaster and aide-de-camp, which position he held under Generals Barton and Pennypacker until the expiration of his term of service in 1871; resumed the study of law; was admitted to the bar in 1871 and commenced practice in Pottsville; unsuccessful candidate for election in 1878 to the Forty-sixth Congress; elected as a Greenbacker to the Forty-seventh and Forty-eighth Congresses and as a Republican to the Forty-ninth and Fiftieth Congresses (March 4, 1881-March 3, 1889); unsuccessful candidate for reelection in 1888 to the Fifty-first Congress; delegate to the Republican National Convention in 1884; elected as a Republican to the Fifty-fourth and Fifty-fifth Congresses (March 4, 1895-March 3, 1899); chairman, Committee on Claims (Fifty-fourth and Fifty-fifth Congresses); unsuccessful candidate for renomination in 1898; elected to the Fifty-ninth Congress to fill the vacancy caused by the death of George R. Patterson; reelected to the Sixtieth Congress and served from November 6, 1906, to January 4, 1909, when he resigned, having been elected judge of the court of common pleas of Schuylkill County, in which capacity he served until his death at Minersville, Pa., January 11, 1917; chairman, Committee on Mileage (Sixtieth Congress); interment in Charles Baber Cemetery, Pottsville, Pa.
Courtesy of Biographical Directory of the United States Congress
Next page