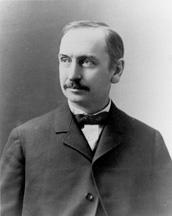 BURTON, Theodore Elijah, Representative and a Senator from Ohio; born in Jefferson, Ashtabula County, Ohio, December 20, 1851; attended the public schools, Grand River Institute, Austinburg, Ohio, and Iowa College, Grinnell, Iowa; graduated from Oberlin (Ohio) College in 1872; studied law; was admitted to the bar in 1875 and commenced practice in Cleveland, Ohio; elected as a Republican to the Fifty-first Congress (March 4, 1889-March 3, 1891); unsuccessful candidate for reelection in 1890; declined to be a candidate for the Republican nomination to Congress in 1892; elected to the Fifty-fourth and to the seven succeeding Congresses and served from March 4, 1895, until his resignation, effective March 3, 1909, having been elected United States Senator; chairman, Committee on Rivers and Harbors (Fifty-sixth through Sixtieth Congresses); chosen a member of the American group of the Interparliamentary Union in 1904; appointed by President Theodore Roosevelt as chairman of the Inland Waterways Commission 1907-1908 and of the National Waterways Commission 1908-1912; member of the National Monetary Commission 1908-1912; elected as a Republican to the United States Senate and served from March 4, 1909, to March 3, 1915; was not a candidate for renomination in 1914; chairman, Committee on Expenditures in the Treasury Department (Sixty-first and Sixty-second Congresses); engaged in banking in New York City; elected as a Republican to the Sixty-seventh and to the three succeeding Congresses and served from March 4, 1921, until his resignation on December 15, 1928; did not seek renomination, having become a candidate for Senator; appointed by President Warren Harding as a member of the World War Debt Funding Commission in 1922; chairman of the United States delegation to the conference for the control of international traffic in arms at Geneva, Switzerland, in 1925; elected on November 6, 1928, as a Republican to the United States Senate to fill the vacancy caused by the death of Frank B. Willis and served from December 15, 1928, until his death in Washington, D.C., October 28, 1929; funeral services were held in the Chamber of the United States Senate; interment in Lake View Cemetery, Cleveland, Ohio.
Courtesy of Biographical Directory of the United States Congress
Next page