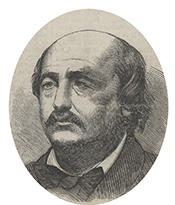 BUTLER, Benjamin Franklin, (grandfather of Butler Ames and father-in-law of Adelbert Ames), Representative from Massachusetts; born in Deerfield, N.H., November 5, 1818; moved with his mother to Lowell, Mass., in 1828; attended high school and Exeter Academy, and was graduated from Waterville College (now Colby College), Waterville, Maine, in 1838; studied law; was admitted to the bar in 1840 and commenced practice in Lowell, Mass.; member of the State house of representatives in 1853; served in the State senate in 1859; delegate to the Democratic National Conventions at Charleston and Baltimore in 1860; entered the Union Army April 17, 1861, as a brigadier general; promoted to major general May 16, 1861, and assigned to the command of Fort Monroe and the Department of Eastern Virginia; resigned November 30, 1865; elected as a Republican to the Fortieth and to the three succeeding Congresses (March 4, 1867-March 3, 1875); chairman, Committee on Revision of the Laws (Forty-second Congress), Committee on the Judiciary (Forty-third Congress); one of the managers appointed by the House of Representatives in 1868 to conduct the impeachment proceedings against Andrew Johnson, President of the United States; unsuccessful candidate for the Republican nomination for Governor in 1871 and 1872 and for reelection to the Forty-fourth Congress in 1874; elected to the Forty-fifth Congress (March 4, 1877-March 3, 1879); declined to be a candidate for renomination; unsuccessful candidate for Governor as an independent in 1878 and as a Democrat in 1879; elected Governor in 1882 by the combined efforts of the Greenback and Democratic Parties; unsuccessful candidate for President of the United States on the Greenback and Anti-Monopolist ticket in 1884; died while attending court in Washington, D.C., January 11, 1893; interment in Hildreth Cemetery, Lowell, Mass.
Courtesy of Biographical Directory of the United States Congress
Next page