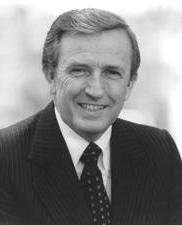 BUMPERS, Dale, a Senator from Arkansas; born in Charleston, Franklin County, Ark., August 12, 1925; attended the public schools of Arkansas and the University of Arkansas, Fayetteville; graduated, Northwestern University Law School, Chicago, Ill., 1951; admitted to the Arkansas bar in 1952 and commenced practice in Charleston; served in the United States Marine Corps 1943-1946; Charleston city attorney 1952-1970; special justice, Arkansas Supreme Court 1968; Governor of Arkansas 1970-1974; elected as a Democrat to the United States Senate in 1974; reelected in 1980, 1986, and again in 1992, and served from January 3, 1975, to January 3, 1999; was not a candidate for reelection in 1998; chairman, Committee on Small Business (One Hundredth through One Hundred Third Congresses); was a resident of Little Rock, Ark., until his death on January 1, 2016; inurnment in the First United Methodist Church Columbarium, Charleston, Ark.
Courtesy of Biographical Directory of the United States Congress
Next page