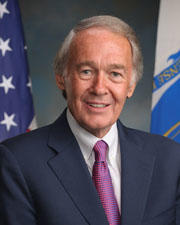 A Senator and Representative from Massachusetts; born in Malden, Middlesex County, Mass., July 11, 1946; attended Immaculate Conception Grammar School, Malden, Mass.; graduated from Malden Catholic High School, Malden, Mass., 1964; B.A., Boston College, Chestnut Hill, Mass., 1968; J.D., Boston College Law School, Chestnut Hill, Mass., 1972; lawyer, private practice; United States Army Reserve, 1968-1973; member of the Massachusetts state house of representatives, 1973-1976; elected as a Democrat to the Ninety-fourth Congress, by special election to fill the vacancy caused by the death of United States Representative Torbert H. Macdonald; reelected to the nineteen succeeding Congresses, and served from November 2, 1976, to July 15, 2013, when he resigned to become a U.S. senator; elected as a Democrat to the U.S. Senate in a special election on June 25, 2013, to fill the vacancy caused by the resignation of John F. Kerry, a seat subsequently held by appointed senator William Cowan, and took the oath of office on July 16, 2013; reelected in 2014, and again in 2020 for the term ending January 3, 2027.
Courtesy of Biographical Directory of the United States Congress
Next page