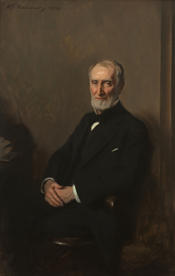 CANNON, Joseph Gurney, Representative from Illinois; born in Guilford, Guilford County, N.C., May 7, 1836; moved with his parents to Bloomingdale, Ind., in 1840; completed preparatory studies; studied law at the Cincinnati Law School; was admitted to the bar in 1858 and commenced practice in Terre Haute, Ind., in 1858; moved to Tuscola, Ill., in 1859; States attorney for the twenty-seventh judicial district of Illinois from March 1861 to December 1868; elected as a Republican to the Forty-third and to the eight succeeding Congresses (March 4, 1873-March 3, 1891); chairman, Committee on Expenditures in the Post Office Department (Forty-seventh Congress), Committee on Appropriations (Fifty-first Congress); moved to Danville, Ill., in 1878; unsuccessful candidate for reelection in 1890 to the Fifty-second Congress; elected to the Fifty-third and to the nine succeeding Congresses (March 4, 1893-March 3, 1913); chairman, Committee on Appropriations (Fifty-fourth through Fifty-seventh Congresses), Committee on Rules (Fifty-eighth through Sixty-first Congresses); Speaker of the House of Representatives (Fifty-eighth through Sixty-first Congresses); received fifty-eight votes for the presidential nomination at the Republican National Convention at Chicago in 1908; unsuccessful candidate for reelection in 1912 to the Sixty-third Congress; again elected to the Sixty-fourth and to the three succeeding Congresses (March 4, 1915-March 3, 1923); declined renomination for Congress at the end of the Sixty-seventh Congress; retired from public life; died in Danville, Vermilion County, Ill., November 12, 1926; interment in Spring Hill Cemetery.
Courtesy of Biographical Directory of the United States Congress
Notice: By custom, the Speaker of the House rarely votes. Votes for CANNON, Joseph Gurney may appear to be missing as a result.
Next page