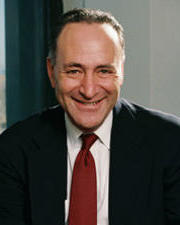 SCHUMER, Charles Ellis (Chuck), a Senator and Representative from New York; born in Brooklyn, N.Y., November 23, 1950; attended the public schools; graduated from Madison High School, Brooklyn 1967; A.B., Harvard University 1971; J.D., Harvard Law School 1974; admitted to the New York bar in 1975; served in the New York State assembly 1975-1980; elected as a Democrat to the Ninety-seventh and to the eight succeeding Congresses (January 3, 1981-January 3, 1999); was not a candidate in 1998 for reelection to the U.S. House of Representatives, but was elected as a Democrat to the United States Senate in 1998; reelected in 2004 and again in 2010 for the term ending January 3, 2017; chair, Democratic Senatorial Campaign Committee (2005-2008); chair, Democratic Policy and Communications Committee (2011-); chair, Joint Economic Committee (One Hundred Tenth and One Hundred Eleventh Congresses), Committee on Rules and Administration (One Hundred Eleventh to One Hundred Thirteenth Congresses).
Courtesy of Biographical Directory of the United States Congress
Next page