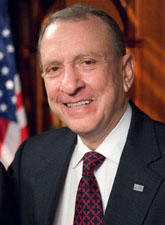 a Senator from Pennsylvania; born in Wichita, Sedgwick County, Kans., February 12, 1930; attended the public schools; graduated, University of Pennsylvania 1951; graduated, Yale University Law School 1956; served in the United States Air Force 1951-1953; admitted to the Pennsylvania bar in 1956 and commenced practice in Philadelphia; assistant district attorney of Philadelphia 1959-1964; assistant counsel, President's Commission on the Assassination of President Kennedy (Warren Commission) 1964; district attorney of Philadelphia 1966-1974; resumed the practice of law 1974-1980; admitted to the New Jersey bar in 1979 and to the District of Columbia bar in 1983; elected as a Republican to the United States Senate in 1980; reelected in 1986, 1992, 1998 and in 2004; changed party affiliation, becoming a Democrat on April 30, 2009; unsuccessful candidate for renomination to the Senate in 2010, and served from January 3, 1981, to January 3, 2011; chair, Select Committee on Intelligence (One Hundred Fourth Congress), Committee on Veterans Affairs (One Hundred Fifth and One Hundred Sixth Congresses, One Hundred Seventh Congress [January 20, 2001-June 6, 2001], One Hundred Eighth Congress), Committee on the Judiciary (One Hundred Ninth Congress); died October 14, 2012; interment in Shalom Memorial Park, Huntingdon Valley, Pa.
Courtesy of Biographical Directory of the United States Congress
Next page