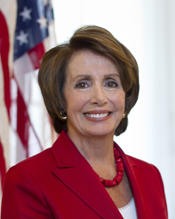 PELOSI, Nancy, (daughter of Thomas D'Alesandro, Jr.), Representative from California; born Nancy DAlesandro in Baltimore, Md., March 26, 1940; A.B., Trinity College, 1962; chair, California State Democratic Party, 1981-1983; finance chairman, Democratic Senatorial Campaign Committee, 1985-1986; elected as a Democrat to the One Hundredth Congress, by special election, to fill the vacancy caused by the death of United States Representative Sala Burton of California, and reelected to the fourteen succeeding Congresses (June 2, 1987-present); minority whip (One Hundred Seventh Congress); minority leader (One Hundred Eighth, One Hundred Ninth, and One Hundred Twelfth through One Hundred Fourteenth Congresses); Speaker of the House (One Hundred Tenth and One Hundred Eleventh Congresses).
Courtesy of Biographical Directory of the United States Congress
Notice: By custom, the Speaker of the House rarely votes. Votes for PELOSI, Nancy may appear to be missing as a result.
Next page