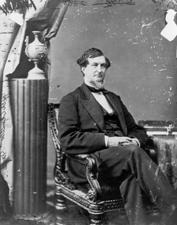 CHANDLER, Zachariah, (nephew of John Chandler and Thomas Chandler, grandfather of Frederick Hale and great-great-granduncle of Rod Dennis Chandler), a Senator from Michigan; born in Bedford, N.H., December 10, 1813; attended the common schools; taught school; moved to Detroit, Mich., in 1833 and engaged in mercantile pursuits; mayor of Detroit in 1851; unsuccessful Whig candidate for Governor in 1852; was prominent in the organization of the Republican Party in 1854; elected as a Republican to the United States Senate in 1857; reelected in 1863 and again in 1869 and served from March 4, 1857, to March 3, 1875; unsuccessful candidate for reelection in 1874; chairman, Committee on Commerce (Thirty-seventh through Forty-third Congresses); appointed Secretary of the Interior by President Ulysses Grant 1875-1877; chairman of the Republican National Executive Committee 1868-1876; again elected in 1879 to the United States Senate to fill the vacancy caused by the resignation of Isaac P. Christiancy and served from February 22, 1879, until his death on November 1, 1879, in Chicago, Ill; interment in Elmwood Cemetery, Detroit, Mich.
Courtesy of Biographical Directory of the United States Congress
Next page