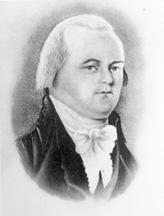 ANDERSON, Joseph Inslee, (father of Alexander Outlaw Anderson), a Senator from Tennessee; born near Philadelphia, Pa., November 5, 1757; studied law; served throughout the Revolutionary War and attained the rank of brevet major; was admitted to the bar and practiced in Delaware for several years; appointed United States judge of the Territory South of the Ohio River in 1791; member of the first constitutional convention of Tennessee; elected in 1797 to the United States Senate to fill the vacancy in the term ending March 3, 1799, caused by the expulsion of William Blount; again elected December 12, 1798, to fill the vacancy in the term ending March 3, 1803, caused by the resignation of Andrew Jackson; reelected in 1803; appointed and subsequently reelected in 1809 for the ensuing term and served continuously from September 26, 1797, to March 3, 1815; served as President pro tempore of the Senate during the Eighth Congress; First Comptroller of the Treasury 1815-1836; lived in retirement until his death in Washington, D.C., on April 17, 1837; interment in the Congressional Cemetery.
Courtesy of Biographical Directory of the United States Congress
Next page