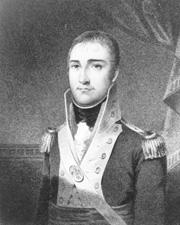 CLAIBORNE, William Charles Cole, (brother of Nathaniel Herbert Claiborne, nephew of Thomas Claiborne [1749-1812], uncle of John Francis Hamtramck Claiborne, granduncle of James Robert Claiborne, and great-great-great granduncle of Corinne Claiborne Boggs), Representative from Tennessee and a Senator from Louisiana; born in Sussex County, Va., in 1775; moved in early youth to New York City; studied law in Richmond, Va.; admitted to the bar and commenced practice in Sullivan County, Tenn.; delegate to the State constitutional convention from Sullivan County in 1796; appointed judge of the superior court in 1796; elected as a Republican from Tennessee to the Fifth and Sixth Congresses, and served from November 23, 1797, to March 3, 1801, in spite of the fact that he was still initially under the constitutional age requirement of twenty-five years; appointed Governor of the Territory of Mississippi in 1801; appointed in October 1803 one of the commissioners to take possession of Louisiana when purchased from France and served as Governor of the Territory of Orleans 1804-1812; Governor of Louisiana 1812-1816; elected as a Democratic Republican from Louisiana to the United States Senate and served from March 4, 1817, until his death, before the assembling of Congress, in New Orleans, La., November 23, 1817; interment in Basin St. Louis Cemetery; reinterment in Metairie Cemetery.
Courtesy of Biographical Directory of the United States Congress
Next page