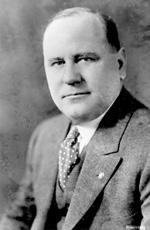 CLARK, Joel Bennett, (son of James Beauchamp Clark), a Senator from Missouri; born in Bowling Green, Mo., January 8, 1890; attended the public schools at Bowling Green, Mo., and at Washington, D.C.; graduated from the University of Missouri at Columbia in 1912, and from the law department of George Washington University, Washington, D.C., in 1914; parliamentarian of the United States House of Representatives 1913-1917; admitted to the Missouri bar in 1914; during the First World War served in the United States Army 1917-1919, attaining the rank of colonel; commenced the practice of law in St. Louis, Mo., in 1919; author and compiler of several manuals on parliamentary law; elected as a Democrat to the United States Senate in 1932 for the term commencing March 4, 1933, and was subsequently appointed to the Senate to fill the vacancy caused by the resignation of Harry B. Hawes for the term ending March 3, 1933; reelected in 1938 and served from February 3, 1933, to January 3, 1945; unsuccessful candidate for renomination in 1944; chairman, Committee on Interoceanic Canals (Seventy-fifth through Seventy-eighth Congresses); member of the Board of Regents, Smithsonian Institution 1940-1944; associate justice of the United States Court of Appeals for the District of Columbia from 1945 until his death in Gloucester, Mass., July 13, 1954; interment in Arlington National Cemetery, Arlington, Va.
Courtesy of Biographical Directory of the United States Congress
Next page