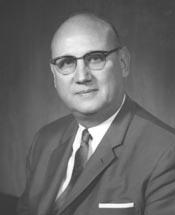 ADAIR, Edwin Ross, Representative from Indiana; born in Albion, Noble County, Ind., December 14, 1907; attended grade and high schools in Albion, Ind.; was graduated from Hillsdale (Mich.) College, A.B., 1928, and from George Washington University Law School, Washington, D.C., LL.B., 1933; was admitted to the Indiana bar in 1933 and commenced the practice of law in Fort Wayne, Ind.; probate commissioner of Allen County, Ind., 1940-1950; during the Second World War was called to active duty as a second lieutenant in the Quartermaster Corps Reserve in September 1941 and served until October 1945; elected as a Republican to the Eighty-second and to the nine succeeding Congresses (January 3, 1951-January 3, 1971); unsuccessful candidate for reelection in 1970 to the Ninety-second Congress; ambassador to Ethiopia, 1971-1974; resumed the practice of law in Ft. Wayne, Ind., where he resided until his death there, May 5, 1983; interment in Greenlawn Memorial Park and Mausoleum, Ft. Wayne.
Courtesy of Biographical Directory of the United States Congress
Next page