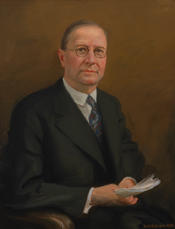 COLLIER, James William, Representative from Mississippi; born in Warren County, Miss., on the Glenwood plantation near Vicksburg September 28, 1872; attended the graded and high schools; was graduated from the law department of the University of Mississippi at Oxford in 1894; was admitted to the bar the same year and commenced practice in Vicksburg; member of the State house of representatives 1896-1899; circuit clerk of Warren County from 1900 until 1909; elected as a Democrat to the Sixty-first and to the eleven succeeding Congresses (March 4, 1909-March 3, 1933); chairman, Committee on Ways and Means (Seventy-second Congress); declined to become a candidate for reelection in 1932 to the Seventy-third Congress, after a controversy over whether candidates should run at large or by districts; appointed a member of the United States Tariff Commission by President Franklin D. Roosevelt and served from March 28, 1933, until his death in Washington, D.C., September 28, 1933; interment in Cedar Hill Cemetery, Vicksburg, Miss.
Courtesy of Biographical Directory of the United States Congress
Next page