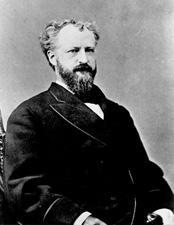 CONKLING, Roscoe, (son of Alfred Conkling and brother of Frederick Augustus Conkling), Representative and a Senator from New York; born in Albany, N.Y., October 30, 1829; moved with his parents to Auburn, N.Y., in 1839; completed an academic course; studied law; admitted to the bar in 1850 and commenced practice in Utica, N.Y.; district attorney for Oneida County in 1850; mayor of Utica 1858; elected as a Republican to the Thirty-sixth and Thirty-seventh Congresses (March 4, 1859-March 3, 1863); chairman, Committee on District of Columbia (Thirty-seventh Congress); unsuccessful candidate in 1862 for reelection; elected to the Thirty-ninth and Fortieth Congresses and served from March 4, 1865, until he resigned to become Senator, effective March 4, 1867; elected in 1867 as a Republican to the United States Senate; reelected in 1873 and again in 1879 and served from March 4, 1867, until May 16, 1881, when he resigned as a protest against the federal appointments made in New York State; was an unsuccessful candidate for reelection to the United States Senate to fill the vacancy caused by his own resignation; chairman, Committee on Revision of the Laws of the United States (Fortieth through Forty-third Congresses), Committee on Commerce (Forty-fourth, Forty-fifth, and Forty-seventh Congresses), Committee on Engrossed Bills (Forty-sixth and Forty-seventh Congresses); resumed the practice of law in New York City; declined to accept a nomination to the United States Supreme Court in 1882; died in New York City, on April 18, 1888; interment in Forest Hill Cemetery, Utica, N.Y.
Courtesy of Biographical Directory of the United States Congress
Next page