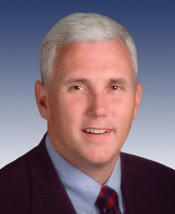 A Representative from Indiana and a Vice President of the United States; born in Columbus, Bartholomew County, Ind., June 7, 1959; graduated from Hanover College, Hanover, Ind., 1981; J.D., Robert H. McKinney School of Law, Indiana University, Indianapolis, Ind., 1986; unsuccessful candidate for election to the United States House of Representatives in 1988 and 1990; elected as a Republican to the One Hundred Seventh and to the five succeeding Congresses (January 3, 2001-January 3, 2013); House Republican Conference Chair (One Hundred Eleventh Congress); was not a candidate for reelection to the One Hundredth Thirteenth Congress in 2012; Governor of Indiana, 2013-2017; elected Vice President of the United States on the Republican ticket headed by Donald Trump, and served from January 20, 2017, until January 20, 2021; unsuccessful candidate for reelection as Vice President in 2020.
Courtesy of Biographical Directory of the United States Congress
Next page