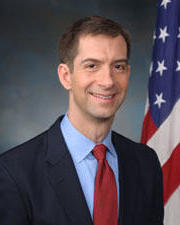 A Senator and Representative from Arkansas; born in Dardanelle, Yell County, Ark., May 13, 1977; A.B., Harvard University, Cambridge, Mass., 1998; attended Claremont Graduate University, Claremont, Calif., 1998-1999; J.D., Harvard University, Cambridge, Mass., 2002; United States Army, 2004-2009; clerk, U.S. Court of Appeals, 2002-2003; lawyer, private practice; management consultant; farmer; elected as a Republican to the One Hundred Thirteenth Congress (January 3, 2013-January 3, 2015); was not a candidate for reelection to the House of Representatives but was elected as a Republican to the United States Senate in 2014; reelected in 2020 for the term ending January 3, 2027.
Courtesy of Biographical Directory of the United States Congress
Next page