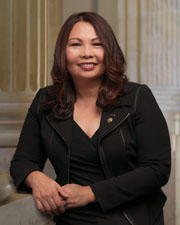 a Senator and Representative from Illinois; born in Bangkok, Thailand, March 12, 1968; graduated from President William McKinley High School, Honolulu, Hawaii, 1985; B.A., University of Hawaii, Manoa, Hawaii, 1989; M.A., The George Washington University, Washington, D.C., 1992; attended Northern Illinois University, DeKalb, Ill.; helicopter pilot, U.S. Army Reserve, 1992-1996; Illinois Army National Guard, 1996-2014, attaining the rank of lieutenant colonel; served in Operation Iraqi Freedom, and was awarded the Purple Heart; unsuccessful candidate for election to the United States House of Representatives in 2006; director, Ill. department of veterans' affairs, 2006-2009; assistant secretary, United States Department of Veterans' Affairs, 2009-2011; delegate to the Democratic National Convention, 2012; elected as a Democrat to the One Hundred Thirteenth Congress and to the succeeding Congress (January 3, 2013-January 3, 2017); was not a candidate for reelection to the House of Representatives but was elected as a Democrat to the United States Senate in 2016 for the term ending January 3, 2023.
Courtesy of Biographical Directory of the United States Congress
Next page