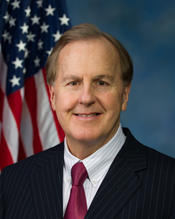 Representative from North Carolina; born in Dallas, Dallas County, Tex., August 15, 1948; B.A., University of Texas, Austin, Tex., 1970; assistant to president of campus ministry organization; business owner; member of the North Carolina state senate, 2003-2008; unsuccessful candidate for lieutenant governor of North Carolina in 2008; elected as a Republican to the One Hundred Thirteenth and to the two succeeding Congresses (January 3, 2013-January 3, 2019); was an unsuccessful candidate for nomination to the One Hundred Sixteenth Congress in 2018.
Courtesy of Biographical Directory of the United States Congress
Next page