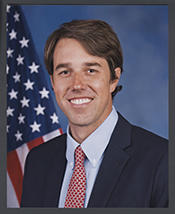 Representative from Texas; born in El Paso, El Paso County, Tex., September 26, 1972; attended El Paso High School and graduated from Woodberry Forest School, Woodberry Forest, Va.; B.A., Columbia University, New York, N.Y., 1995; business owner; member of the El Paso, Tex., city council, 2005-2011; elected as a Democrat to the One Hundred Thirteenth and to the two succeeding Congresses (January 3, 2013-January 3, 2019); was not a candidate for reelection to the One Hundred Sixteenth Congress in 2018, but was an unsuccessful candidate for election to the United States Senate.
Courtesy of Biographical Directory of the United States Congress
Next page