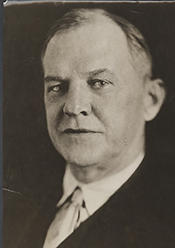 CRISP, Charles Robert, (son of Charles Frederick Crisp), Representative from Georgia; born in Ellaville, Schley County, Ga., October 19, 1870; attended the public schools of Americus, Ga.; clerk in the Interior Department, Washington, D.C., 1889-1891; parliamentarian of the House of Representatives 1891-1895; studied law; was admitted to the bar in 1895 and commenced practice in Americus, Sumter County, Ga.; elected as a Democrat to the Fifty-fourth Congress to fill the vacancy caused by the death of his father, Charles F. Crisp, and served from December 19, 1896, to March 3, 1897; was not a candidate for renomination in 1896; resumed the practice of law in Americus, Ga.; judge of the city court of Americus 1900-1912; again parliamentarian of the House of Representatives in the Sixty-second Congress; parliamentarian of the Democratic National Convention in 1912; elected to the Sixty-third and to the nine succeeding Congresses and served from March 4, 1913, until October 7, 1932, when he resigned to become a member of the United States Tariff Commission, in which capacity he served until December 30, 1932; was not a candidate for renomination in 1932, but was an unsuccessful candidate for the nomination for United States Senator to fill the vacancy occasioned by the death of William J. Harris; member of the American World War Debt Funding Commission; resumed the practice of his chosen profession in Washington, D.C.; died in Americus, Ga., February 7, 1937; interment in Oak Grove Cemetery.
Courtesy of Biographical Directory of the United States Congress
Next page