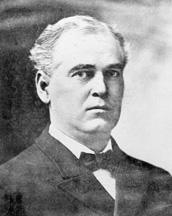 CULBERSON, Charles Allen, (son of David Browning Culberson), a Senator from Texas; born in Dadeville, Tallapoosa County, Ala., June 10, 1855; moved to Texas with his parents, who settled first in Gilmer and later in Jefferson; attended the common schools and graduated from the Virginia Military Institute at Lexington in 1874; studied law at the University of Virginia at Charlottesville in 1876 and 1877; admitted to the bar in 1877 and commenced practice in Jefferson, Tex.; moved to Dallas, Tex., in 1887; attorney general of Texas 1890-1894; Governor of Texas 1894-1898; elected as a Democrat to the United States Senate January 25, 1899; reelected in 1905, 1911, and again in 1916, and served from March 4, 1899, to March 3, 1923; unsuccessful candidate for reelection in 1922; Democratic caucus chairman 1907-1909; chairman, Committee on Additional Accommodations for the Library (Sixty-first Congress), Committee on Public Health and National Quarantine (Sixty-second Congress), Committee on Judiciary (Sixty-third through Sixty-fifth Congresses), Committee on Private Land Claims (Sixty-sixth Congress); lived in retirement until his death in Washington, D.C. March 19, 1925; interment in East Oakwood Cemetery, Fort Worth, Tex.
Courtesy of Biographical Directory of the United States Congress
Next page