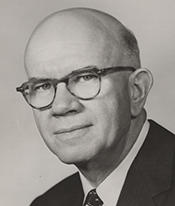 DAGUE, Paul Bartram, Representative from Pennsylvania; born in Whitford, Chester County, Pa., May 19, 1898; attended the public schools; took special studies at West Chester State Teachers College and studied electrical engineering at Drexel Institute, Philadelphia, Pa.; United States Marine Corps, First World War, 1918-1919; assistant superintendent of the Pennsylvania Department of Highways, 1925-1935; deputy sheriff, Chester County, Pa., 1936-1943; sheriff, Chester County, Pa., 1944-1946; elected as a Republican to the Eightieth and to the nine succeeding Congresses and served until his resignation on December 30, 1966 (January 3, 1947-December 30, 1966); was not a candidate for reelection to the Ninetieth Congress in 1966; retired and resided in Downingtown, Pa.; died on December 2, 1974, in West Chester, Pa.; interment in Northwood Cemetery, Downingtown, Pa.
Courtesy of Biographical Directory of the United States Congress
Next page