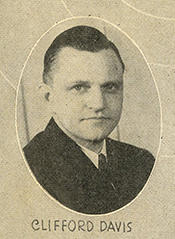 DAVIS, Clifford, Representative from Tennessee; born in Hazlehurst, Copiah County, Miss., November 18, 1897; moved with his parents to Memphis, Tenn., in 1911; attended the public schools of Memphis, and was graduated from the law department of the University of Mississippi at Oxford in 1918; was admitted to the bar in 1918 and commenced practice in Memphis, Tenn.; city judge of Memphis 1923-1927; vice mayor and commissioner of public safety of Memphis 1928-1940; elected as a Democrat to the Seventy-sixth Congress to fill the vacancy caused by the resignation of Walter C. Chandler; reelected to the Seventy-seventh and to the eleven succeeding Congresses and served from February 15, 1940, to January 3, 1965; chairman, Special Committee on Campaign Expenditures (Eighty-fourth through Eighty-eighth Congresses); unsuccessful candidate for renomination in 1964 to the Eighty-ninth Congress; returned to the practice of law in Washington, D.C., and practiced until his death there June 8, 1970; interment in Forest Hill Cemetery, Memphis, Tenn.
Courtesy of Biographical Directory of the United States Congress
Next page