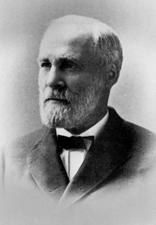 Representative and a Senator from Massachusetts; born in Cummington, Mass., October 30, 1816; attended the common schools and received private instruction in preparatory studies; graduated from Yale College in 1839; became a teacher and edited the Greenfield Gazette and the North Adams Transcript; studied law; admitted to the bar in 1842 and commenced practice in North Adams, Mass.; member, State house of representatives 1848-1849, 1852; member, State senate 1850; member of the State constitutional convention in 1853; district attorney for the western district of Massachusetts 1853-1857; elected to the Thirty-fifth and to the eight succeeding Congresses (March 4, 1857-March 3, 1875); chairman, Committee on Elections (Thirty-seventh through Fortieth Congresses), Committee on Appropriations (Forty-first Congress), Committee on Ways and Means (Forty-second and Forty-third Congresses); declined to be a candidate for reelection in 1874; elected as a Republican to the United States Senate in 1875; reelected in 1881 and again in 1887, and served from March 4, 1875, to March 3, 1893; declined to be a candidate for reelection in 1893; chairman, Committee on Public Buildings and Grounds (Forty-fifth Congress), Committee on Indian Affairs (Forty-seventh through Fifty-second Congresses); settled in Pittsfield, Mass.; chairman of the commission created to administer the tribal affairs of the Five Civilized Tribes of Indians in the Indian Territory 1893-1903; died in Pittsfield, Mass., February 5, 1903; interment in Pittsfield Cemetery.
Courtesy of Biographical Directory of the United States Congress
Next page