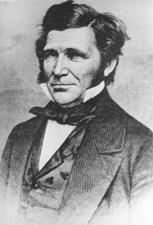 Representative and a Senator from Georgia; born in Greensboro, Greene County, Ga., January 4, 1798; attended the common schools; graduated from Franklin College, Athens, Ga., in 1816; studied law; admitted to the bar in 1816 and commenced practice in Greensboro, Ga.; member, State house of representatives; elected as a State Rights candidate to the Twenty-fourth Congress to fill the vacancy caused by the death of John Coffee; reelected as a Whig to the Twenty-fifth, Twenty-sixth, and Twenty-seventh Congresses and served from November 7, 1836, to November 13, 1841, when he resigned; chairman, Committee on Mileage (Twenty-fifth Congress), Committee on Claims (Twenty-sixth Congress), Committee on Military Affairs (Twenty-seventh Congress); unsuccessful candidate for Governor of Georgia in 1841; judge of the Ocmulgee circuit court 1845; elected as a Whig to the United States Senate and served from March 4, 1849, to March 3, 1855; chairman, Committee on Private Land Claims (Thirty-second Congress); presided over the Southern convention at Memphis in 1853; died in Greensboro, Ga., on May 5, 1856; interment in Greensboro Cemetery.
Courtesy of Biographical Directory of the United States Congress
Next page