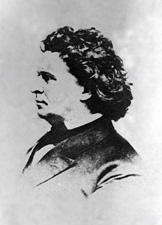 ASHLEY, Chester, a Senator from Arkansas; born in Massachusetts, June 1, 1790; moved with his parents to Hudson, N.Y.; attended the common schools and graduated from Williams College, Williamstown, Mass., and the Litchfield (Conn.) Law School; admitted to the bar in 1817 and commenced the practice of law in Hudson, N.Y.; moved to Little Rock, Ark., in 1820; elected as a Democrat to the United States Senate in 1844 to fill the vacancy caused by the death of William S. Fulton; reelected in 1846, and served from November 8, 1844, until his death in Washington, D.C., April 29, 1848; chairman, Committee on the Judiciary (Twenty-ninth and Thirtieth Congresses); interment in Mt. Holly Cemetery, Little Rock, Ark.
Courtesy of Biographical Directory of the United States Congress
Next page