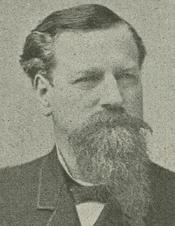 DOCKERY, Alexander Monroe, Representative from Missouri; born near Gallatin, Daviess County, Mo., February 11, 1845; attended the common schools and Macon Academy, Macon, Mo.; studied medicine; was graduated from the St. Louis (Mo.) Medical College March 2, 1865, and commenced practice near Linneus, Linn County; attended lectures at Bellevue College, New York City, and Jefferson Medical College, Philadelphia, during the winter of 1865-1866; returned to Missouri and settled in Chillicothe, where he continued the practice of his profession for seven years; president of the board of education of Chillicothe, Mo., 1870-1872; served as county physician of Livingston County; in March 1874 returned to Gallatin, Mo., where he assisted in organizing the Farmers Exchange Bank; chairman of the congressional committee of his district; member of the city council of Gallatin 1878-1881; mayor 1881-1883; delegate to and chairman of the Democratic State conventions in 1886 and 1901; elected as a Democrat to the Forty-eighth and to the seven succeeding Congresses (March 4, 1883-March 3, 1899); chairman, Committee on Expenditures in the Post Office Department (Fiftieth Congress); was not a candidate for renomination in 1898; Governor of Missouri 1901-1905; delegate to the Democratic National Convention in 1904; appointed Third Assistant Postmaster General on March 17, 1913, and served until his resignation on March 31, 1921; died in Gallatin, Mo., December 26, 1926; interment in Edgewood Cemetery, Chillicothe, Livingston County, Mo.
Courtesy of Biographical Directory of the United States Congress
Next page