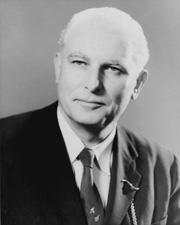 DODD, Thomas Joseph, (father of Christopher John Dodd), Representative and a Senator from Connecticut; born in Norwich, New London County, Conn., May 15, 1907; attended the public schools; graduated from St. Anselms Preparatory School in 1926, Providence College in 1930, and Yale University Law School in 1933; special agent for Federal Bureau of Investigation in 1933 and 1934; Connecticut director of National Youth Administration 1935-1938; assistant to five successive United States Attorneys General 1938-1945; vice chairman, Board of Review, and later executive trial counsel, Office of the United States Chief of Counsel for the Prosecution of Axis Criminality at Nuremberg, Germany, in 1945 and 1946; engaged in private practice of law in Hartford, Conn., 1947-1953; elected as a Democrat to the Eighty-third and Eighty-fourth Congresses (January 3, 1953-January 3, 1957); was unsuccessful for election to the United States Senate in 1956; elected as a Democrat to the United States Senate in 1958; reelected in 1964 and served from January 3, 1959, to January 3, 1971; unsuccessful candidate for reelection in 1970; censured by the Senate in 1967 for financial misconduct; was a resident of Old Lyme, Conn., until his death on May 24, 1971; interment in St. Michaels New Cemetery, Pawcatuck, Conn.
Courtesy of Biographical Directory of the United States Congress
Next page