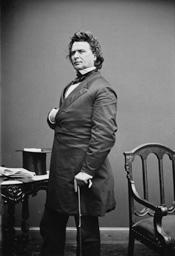 A Representative from Ohio; born near Pittsburgh, Pa., November 14, 1824; instructed himself in elementary subjects while employed as a clerk on boats operating on the Ohio and Mississippi Rivers; editor of the Dispatch, and afterwards of the Democrat, in Portsmouth, Ohio; studied law; was admitted to the bar in 1849 but never practiced; moved to Toledo, Ohio, and engaged in the wholesale drug business; elected as a Republican to the Thirty-sixth and to the four succeeding Congresses (March 4, 1859-March 3, 1869); chairman, Committee on Territories (Thirty-seventh through Fortieth Congresses); unsuccessful Republican candidate for reelection in 1868 to the Forty-first Congress; delegate to the Philadelphia Loyalists' Convention in 1866; Governor of the Territory of Montana in 1869 and 1870; constructed the Toledo, Ann Arbor & Northern Railroad, and served as president from 1877 to 1893; died in Alma, Gratiot County, Mich., September 16, 1896; interment in Woodlawn Cemetery, Toledo, Ohio.
Courtesy of Biographical Directory of the United States Congress
Next page