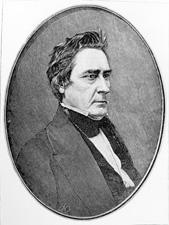 a Senator from Missouri; born in Frogtown, Ky., August 11, 1807; attended Transylvania University, Lexington, Ky.; studied law; admitted to the bar and commenced practice in Liberty, Clay County, Mo., in 1829; also engaged in agricultural pursuits; member of the State house of representatives in 1834, and again in 1838; appointed judge of the Platte County circuit court in 1841; appointed and subsequently elected in 1843 as a Democrat to the United States Senate to fill the vacancy caused by the death of Lewis F. Linn; reelected in 1849, and served from October 14, 1843, to March 3, 1855; President pro tempore of the Senate (Twenty-ninth through Thirty-third Congresses); chairman, Committee on the Militia (Twenty-ninth Congress), Committee on Indian Affairs (Thirtieth through Thirty-second Congresses); resumed the practice of law; died at his home near Gower, Clinton County, Mo., January 26, 1886; interment in Greenlawn Cemetery, Plattsburg, Mo.
Courtesy of Biographical Directory of the United States Congress
Next page