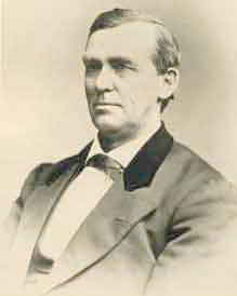 DURHAM, Milton Jameson, Representative from Kentucky; born near Perryville, Mercer County (now Boyle County), Ky., May 16, 1824; attended the common schools; was graduated from Indiana Asbury (now De Pauw) University, Greencastle, Ind., in 1844; taught school for several years; was graduated from the Louisville (Ky.) Law School in 1850; was admitted to the bar in the same year and commenced practice in Danville, Boyle County, Ky.; circuit judge of the eighth judicial district in 1861 and 1862; elected as a Democrat to the Forty-third, Forty-fourth, and Forty-fifth Congresses (March 4, 1873-March 3, 1879); chairman, Committee on Revision of the Laws (Forty-fourth Congress); unsuccessful candidate for renomination in 1878; resumed the practice of law in Danville, Ky.; appointed First Comptroller of the Treasury of the United States on March 20, 1885, and served until the office was discontinued on April 22, 1889; moved to Lexington, Ky., in 1890 and engaged in banking; appointed deputy clerk, Internal Revenue Service, at Lexington, Ky., in 1901 and served until his death in that city on February 12, 1911; interment in Belleview Cemetery, Danville, Ky.
Courtesy of Biographical Directory of the United States Congress
Next page