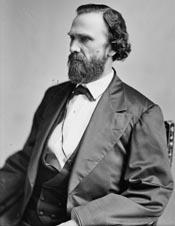 ATKINS, John DeWitt Clinton, Representative from Tennessee; born near Manlys Chapel, Henry County, Tenn., June 4, 1825; attended a private school in Paris, Tenn., and was graduated from the East Tennessee University at Knoxville in 1846; studied law; was admitted to the bar but did not practice; engaged in agricultural pursuits; member of the State house of representatives 1849-1851; served in the State senate 1855-1857; elected as a Democrat to the Thirty-fifth Congress (March 4, 1857-March 3, 1859); unsuccessful candidate for reelection in 1858 to the Thirty-sixth Congress; during the Civil War served as lieutenant colonel of the Fifth Tennessee Regiment in the Confederate Army in 1861; elected to the Confederate Provisional Congress in August and November 1861 and in November 1863; elected as a Democrat to the Forty-third and to the four succeeding Congresses (March 4, 1873-March 3, 1883); chairman, Committee on Appropriations (Forty-fifth and Forty-sixth Congresses); was not a candidate for renomination in 1882; engaged in agricultural pursuits near Paris, Henry County, Tenn.; appointed United States Commissioner of Indian Affairs by President Cleveland on March 21, 1885, and served until June 13, 1888, when he resigned; was an unsuccessful candidate for the Democratic nomination for United States Senator in 1888; again engaged in agricultural pursuits; retired from active pursuits in 1898 and moved to Paris, Tenn., where he lived in retirement until his death on June 2, 1908; interment in the City Cemetery.
Courtesy of Biographical Directory of the United States Congress
Next page