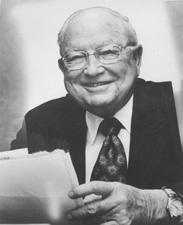 EASTLAND, James Oliver, a Senator from Mississippi; born in Doddsville, Sunflower County, Miss., November 28, 1904; moved with his parents to Forest, Miss., in 1905; attended the public schools, the University of Mississippi at Oxford, Vanderbilt University, Nashville, Tenn., and the University of Alabama at Tuscaloosa; studied law; admitted to the bar in 1927 and commenced practice in Forest, Miss.; also engaged in agricultural pursuits; member, State house of representatives 1928-1932; moved to Ruleville, Miss., in 1934; appointed on June 30, 1941, as a Democrat to the United States Senate to fill the vacancy caused by the death of Pat Harrison and served from June 30, 1941, to September 28, 1941; was not a candidate for election to the vacancy; elected as a Democrat to the United States Senate in 1942; reelected in 1948, 1954, 1960, 1966, and again in 1972, and served from January 3, 1943, until his resignation December 27, 1978; was not a candidate for reelection in 1978; served as President pro tempore of the Senate during the Ninety-second through the Ninety-fifth Congresses; chairman, Committee on the Judiciary (Eighty-fourth through Ninety-fifth Congresses); was a resident of Doddsville, Miss., until his death on February 19, 1986; interment in Forest Cemetery, Forest, Miss.
Courtesy of Biographical Directory of the United States Congress
Next page