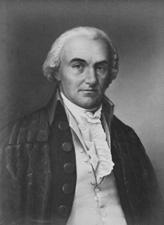 ELLSWORTH, Oliver, (father of William Wolcott Ellsworth), a Delegate and a Senator from Connecticut; born in Windsor, Conn., April 29, 1745; pursued preparatory studies; attended Yale College and graduated from the College of New Jersey (now Princeton University) in 1766; studied law; admitted to the bar in 1771 and commenced practice in Windsor; moved to Hartford, Conn., in 1775; member, State general assembly 1773-1776; appointed State attorney in 1777; Member of the Continental Congress 1778-1783; from 1780 to 1785 was a member of the Governors council; judge of the Connecticut Superior Court 1785-1789; delegate to the convention that framed the federal Constitution in 1787; elected to the United States Senate; reelected and served from March 4, 1789, to March 8, 1796, when he resigned to accept a judicial appointment; appointed Chief Justice of the United States Supreme Court in 1796 and served until 1800 when he retired; appointed Envoy Extraordinary and Minister Plenipotentiary to France to negotiate a treaty 1799; returned to the United States in 1801; again a member of the Governors council 1801-1807; died in Windsor, Conn., November 26, 1807; interment in the Old Cemetery.
Courtesy of Biographical Directory of the United States Congress
Next page