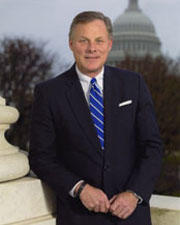 a Senator and Representative from North Carolina; born in Charlottesville, Albemarle County, Va., November 30, 1955; graduated from Reynolds High School, Winston-Salem, N.C., 1974; B.A., Wake Forest University, Winston-Salem, N.C., 1978; unsuccessful candidate for election to the One Hundred Third Congress in 1992; elected as a Republican to the One Hundred Fourth and to the four succeeding Congresses (January 3, 1995-January 3, 2005); was not a candidate for reelection to the House of Representatives, but was elected to the United States Senate in 2004; reelected in 2010, and again in 2016 for the term ending January 3, 2023; chair, Select Committee on Intelligence (One Hundred Fourteenth through One Hundred Sixteenth Congresses).
Courtesy of Biographical Directory of the United States Congress
Next page